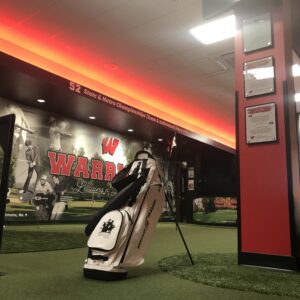 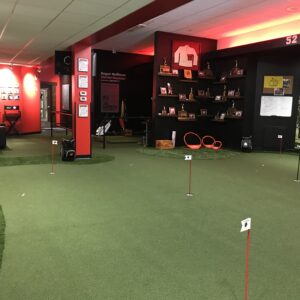 61 Donors supported the project financially and/or through in-kind support.

Current Donors to the Project:

State of the art technology. A mini-museum paying tribute to Westside golfers and moments spanning decades. One room inspiring greatness and passion for a game spanning 600 years.

It’s called The Swede Center: 1,800 square feet of golfing paradise that would awe golfing veterans and beginners alike. It’s located inside Westside High School, THE first of its kind in a public high school in the United States. This state-of-the-art facility was unveiled to Westside student-athletes and coaches in January, and officially dedicated on February 15.

The Swede Center was constructed in an area of the school that wasn’t being used.  The high ceilings made it perfect place for a golf simulator where a golfer can play one hole or all 18 on some of the most famous courses in the world.  In addition to the Roger Hoffman Warrior Simulator, the training center also includes areas to practice putting and chipping, the Grant Jabenis Warrior Hitting Bay, locker room and the Froendt Family Golfer’s Lounge.  In addition to the high-tech golf equipment, the facility provides a history lesson in Westside golf highlighting past state and metro champions, both individual and teams.

Named for Merrill ‘Swede’ Carlson, The Swede Center at Westside High School was made possible entirely through donations (100% privately raised), many from alumni, community members and parents. Sixty-one donors in all supported the project, including the Carlson family, supported this project to provide an elite facility for Westside golfers, and to grow the game of golf with future generations. The girls and boys golf teams are already planning a Jr. Warrior Golf Clinic for the district’s elementary schools, allowing younger students the opportunity to be fitted for clubs and practice in the facility at no charge to them or their families. For many children, including students at Westside’s four Title I schools, this might be the only opportunity they would have to experience the game of golf. Merrill Carlson himself faced challenges in his life due to financial issues, including being forced to leave college due to lack of funds. His son Scott (‘75), hopes The Swede Center and a new scholarship trust of the same name, will allow Westside students the opportunities his father did not have.

The district honored the Carlson family at the Ribbon Cutting.  “[People] are going to get both an access and introduction to the game of golf,” said Carlson. “It’s going to give students and stakeholders all throughout District 66 and the Warrior Community a chance to really further the game of golf.”

If interested in a tour of The Swede Center, please email the Westside Foundation at westside.foundation@westside66.net.